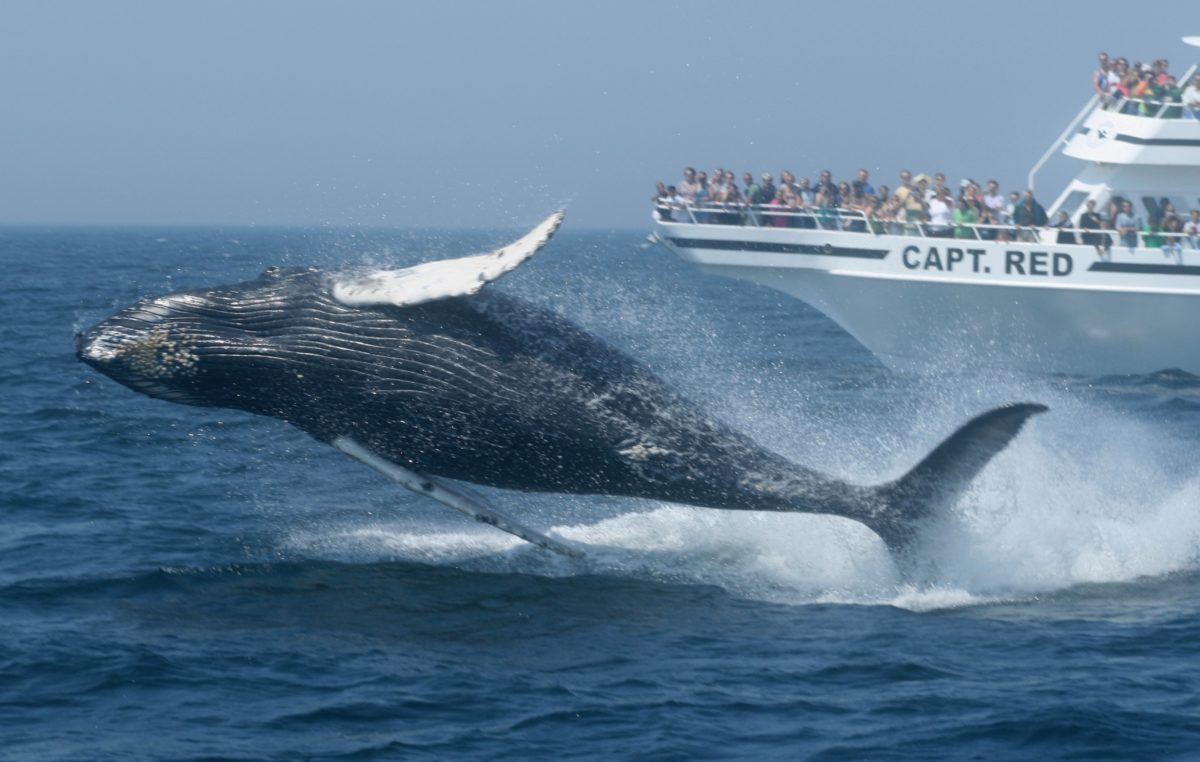 ‘There she blows!’ Massachusetts has launched a fun and informative Whale Trail that explores the state’s special connection with these fascinating ocean mammals. The Massachusetts Whale Trail links nearly 40 museums, attractions, whale-watching excursions, historic sites and tours, all of which are laid out on a useful, interactive map that makes trip-planning easy.

With a great mix of fun and learning, the Massachusetts Whale Trail is a perfect activity to do as part of a family fly-drive or eco-holiday in New England.

The World Wildlife Fund ranks Massachusetts as one of the top 10 places in the world to go whale-watching! Numerous whale-watching charter companies operate from the coastal towns of Massachusetts, including Gloucester, Provincetown and Nantucket.

These whale-watching expeditions will take you roughly 40km off the coast to the Stellwagen Bank, where you will be treated to the awe-inspiring sights of humpback, pilot and blue whales breaching and spouting through the deep blue Atlantic Ocean. Most charters are led by onboard naturalists, who will help educate, inspire and provide a deeper understanding and appreciation of the fragile marine environment.

Whale-watching charters typically run from April to October, so if you are interested in taking one, you may want to plan your visit to the Bay State during the warmer months of the year.

Massachusetts connection to whales goes back centuries, with whaling playing a crucial role in the economic development of the state in the 1800’s. Numerous sites, tours and attractions on the Massachusetts Whale Trail help visitors to understand and interpret the story of whaling in Massachusetts.

Located an hour south of Boston, the coastal city of New Bedford was once a hive of whaling industry and has many historic sites for visitors to take in. One of the best ways to explore this lively port is by following in the footsteps of the author of Moby Dick on the Herman Melville New Bedford Walking Tour. Looking for adventure, a young Herman Melville came to New Bedford in the 1840’s and joined a whaling crew. The experiences he had in the city and at sea formed the basis of his iconic novel. The walking tour takes in the city’s historic whaling sites, including the New Bedford Whaling Museum, the traditional Mariner’s Home, Seamen’s Bethel Chapel (think fiery sermons about Leviathans before setting out to sea!) and the Rotch-Jones-Duff (RJD) House and Garden Museum (A magnificent mansion with sculptured grounds built by a local whaling dynasty).

The scenic island of Nantucket, just off the coast of Cape Cod, was also major whaling port in the 19th century. While taking in this quaint and bustling New England town on foot, visitors can explore the town’s rich history at sites such as the fascinating Nantucket Whaling Museum, Hadwen House (a sumptuous Greek Revival mansion built by a whaling merchant) and the austere Quaker Meeting House. Nantucket is easy to get to by a short ferry trip from Cape Cod that runs frequently throughout the year.

When you are back in the Boston area, be sure to check out the Harvard Museum of Natural History. Here the incredible Great Mammal Hall features the massive, preserved skeletons of sperm and fin whales, giving you a true appreciation of the gigantic scale of these creatures.

Norwegian also fly direct from Dublin (5 times a week), Cork (3 times a week) and Shannon (twice a week) to Providence, which is a short drive from the whale attractions in southern Massachusetts.

The flight time to Massachusetts is approx. 7hrs.

Why not also check out our blog post on Weekend Breaks to Providence, Rhode Island?

previousSeek and You Shall Find in Providence, Rhode Island